Apologies for missing last week’s newsletter. The entire Khullar Relph household was sick (Covid, we think), but other than the persistent fatigue I’m feeling, we’re all better and back to work and school.

This September marked the 20th anniversary of my becoming a freelance journalist. I stepped back from journalism ten years ago after my son was born, to focus more on books and business. Coming back to it this year, I’ve noticed that while I’ve had to build up the good habits again (marketing consistently, walking away from unreasonable clients, getting started on assignments early, etc.), the bad ones remained solid. The late night rabbit holes of research, for instance, or the panic about having “only two” assignments even when I know more are on the way. (I now have six assignments due by the end of the month. Oy.)

I used to believe that feast and famine was a staple of the freelancer’s life, but I don’t anymore. I was careful not to repeat the mistakes I made as a rookie freelancer and have prioritized clients who give me work regularly over pitching higher-prestige markets that only have room for one-offs. I have four regular clients now, each of whom assigns me between two and eight articles a month. Once I hit six regular clients—enough that losing two simultaneously wouldn’t massively impact my finances, but not so many that I can’t manage the assignments—I’ll start pitching some of the dreamier publications and the long-form stories that I research for fun.

I’m incredibly grateful that I learned, very early on in my career, that this is a business. And that keeping this business solid and solvent would be the ticket to taking risks and telling the stories that really mattered to me.

I feel solid, solvent, and—for the first time in very long—satisfied. So now it’s time to have some fun. This week, I’m trying to convince my editors to send me to Scotland for a story. I’ll let you know how it goes.

A very happy Thanksgiving to those of you who celebrate.

Publicly available Twitter data shows that Twitter usage has spiked since Elon Musk closed his acquisition of the platform. However, leaked internal research from the company suggests that the highest-growing topics of interest are cryptocurrency and pornography.

“Only a smidgen of the 150,000 Twitter Blue subscribers are fake or joke accounts, according to data compiled from Twitter’s public data feed for software developers,” the Washington Post reports. “A large portion of the most followed accounts that got ‘verified’ via Twitter Blue, according to the data reviewed by The Post, are from a few specific subcommunities on Twitter: pornography, cryptocurrency advocates and overseas accounts, particularly from the Middle East.”

Why it matters: Twitter as a primary means of audience-building for book sales was always a terrible idea. But what Twitter was excellent at, especially for journalists, was facilitating conversations and connections. As recently as last week, I reached out to a government official on Twitter for comment on a story and got an immediate response.

But with the chaos that has ensued since Musk’s acquisition, the higher levels of spam bot activity, and the diminishing level of security (two-factor authentication hasn’t been working for days), journalists have lost trust in the platform and are actively seeking alternatives.

Key takeaway: There is unlikely to be a direct Twitter replacement and we’ll see more distributed communities being set up on platforms such as Discord. Mastadon has come up as an alternative, but it is clunky and does not want to become a Twitter replacement.

Journalists and writers have been looking at Post.news, a microblogging platform set up by former Waze CEO Noam Bardin. “Post will be a civil place to debate ideas; learn from experts, journalists, individual creators, and each other; and have some fun,” Bardin wrote in an introductory post.

Personally, of all the alternatives, I’m most intrigued by Post. Will it match up to the expectations it’s building? I’ll report back once I have access.

Spotify has launched audiobooks in the UK, making their catalog of 300,000 titles available for purchase.

Penguin Random House’s deal to buy Simon & Schuster, which was blocked by a judge last month, is now close to collapsing. S&S’s parent company has decided to allow the purchase agreement to expire, which means that an appeal cannot be filed, and S&S will go back on the market.

TikTok is capitalizing on the popularity of BookTok by launching a marketplace. Partnerships with publishers and retailers will allow users to buy books directly through the platform.

What I Learned From Writing 1,000+ Stories For Over 300 Publications

In these in-depth interviews with writers and media/publishing professionals at every stage of the writing and publishing career, we go deep into a specific aspect of their process and life. Each interview is a mini masterclass in the art, craft, and business of writing.

Have environment, climate or wildlife stories that need a home? Send them here:

Our How to Pitch page now has a total of 199 markets, including writer’s guidelines for Wired, National Geographic, The New York Times, AARP, Financial Times, Writer’s Digest, and more. Find them here.

Let them filter themselves out.

Don’t worry about the people who aren’t listening and never will.

Worry about the people who are.

INDONESIA: “If there was a World Cup equivalent for book publishing, that would be the biannual International Publishers Association Congress, just completed in Jakarta, Indonesia. The event drew representatives from publishers associations across the world, ranging from countries with large and powerful constituencies, such as Germany, India and Mexico, and smaller but influential countries, such as Finland and Thailand. The Congress attracted over 600 delegates, 52 speakers and moderators, from 63 countries.”

GERMANY: “Der Tagesspiegel, one of the most popular German daily newspapers, has built an immersive, in-person game with the hopes that players walk away with an understanding of how their local governments work (and possibly pique their interest in participating in the real thing).”

FRANCE: “Although the audiobook market in France is still young, digital growth is increasing, with 800,000 more audiobook readers in 2022, according to the Syndicat national de l’édition (SNE), France’s publishers’ association.” 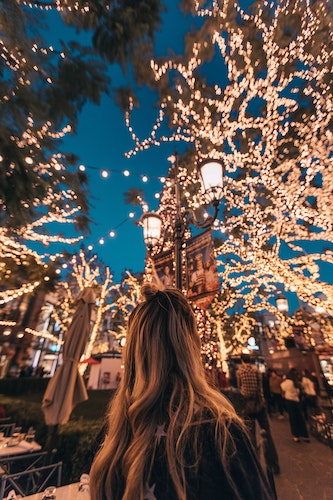 Photo by Roberto Nickson on Unsplash

“All stories have to at least try to explain some small portion of the meaning of life.”

The Wordlings wanted to read a hundred books this year, but might only end up making it to 75. Share The Wordling with a writer who wants to read more, too.