I’m sitting by my window and sipping my first cup of tea as I write this to you. It’s become a part of my daily routine, getting up and thinking about what I’ll say to you each day. There is so much going on in the world that is sad, frustrating, and terrifying. I find it calming to have these five minutes in the morning to sit with myself before getting thrown into it.

You probably have a lot to say and write and do, and much of it feels urgent. Write those opinion pieces, send off those pitches, and finish those novels. But don’t forget to take a few minutes every day to center yourself as you do.

It’s gearing up to be a summer of discontent with strikes planned in many regions and industries, and media and publishing are no exception.

We already talked about Wired’s union threatening to strike for two days if they can’t reach a contract agreement with Condé Nast management by July 12. In Europe, French public journalists held a one-day strike on June 28 over President Emmanuel Macron’s plan to abolish the TV license fee and fund public media broadcasters through general taxation. Across the Channel, journalists at the UK’s largest regional publisher Reach are set to vote on possible strike action after the National Union of Journalists rejected a pay increase offer of 3% or £750, whichever is more.

In publishing, unionized employees of HarperCollins in the US have voted to authorize a strike if the publisher does not agree to a fair contract, according to Publishers Weekly. “The union, Local 2110 of the UAW, represents more than 250 HC employees in the design, editorial, legal, marketing, publicity, and sales departments. According to the union, current contract negotiations with HC management began in December 2021, when a one-year pandemic extension of the contract was set to expire. The union is bargaining for higher pay, improved family leave benefits, a greater commitment to diversifying staff, and stronger union protection.”

What does this mean for you?

Unless you’re on staff for these publications or publishers (as many of our readers are), the biggest impact will be on timelines and assignments. Expect delays and possibly overwhelmed editors.

What’s more interesting to note is that much like freelancer and author pay, staff pay has remained low and stagnant in both media and publishing for years, if not decades. These unionized actions, if successful, help raise the pay and offer better terms for full-time media workers. It’s a good time as an independent writer and author to be thinking about—and asking for—this too.

How to cultivate creative endurance: “Books take forever to make. From the moment I start a manuscript, I know I’m in for a long haul, all by myself,” writes author David Yoon. “I do sometimes brainstorm with others, but for the most part it’s just me, alone in a room, putting words down one by one. For days. Months. Years! So how do I keep going when the only one watching over me is… me?”

How to solve writer’s block: Writer’s block is the result of several problems, like low self-confidence and poor planning. And to fully address this complicated situation, it’s important to take a number of steps that will restore the writer’s confidence and plan a course for success, writes David Safford.

Over at Medium, Erica Verrillo has put together a list of 41 writing contests with July deadlines that have no entry fee.

The 1729 Book Prize in Prose. Genre: Fiction and nonfiction. “We’re open to most prose genres, though we tend to lean toward semi-experimental works with a strong literary bent. Hybrid works are welcome.” Prize: $1000 and publication. Deadline: July 15, 2022.

Iron Horse Prize. Genre: First book of collected prose. Prize: The author of the winning entry will receive $1000, and their collection will be published in the summer of 2023 by Texas Tech University Press. Deadline: July 15, 2022. Free submissions on July 15 only.

Boardman Tasker Prize. Restrictions: The prize will be awarded for a work first published or distributed in the United Kingdom between July 17th 2021 and July 16th 2022. Genre: Books with a mountain, not necessarily mountaineering, theme whether fiction, non-fiction, drama or poetry, written in the English language. Prize: £3,000.00. Deadline: July 16, 2022.

Someday, I’ll start pitching the stories I truly believe in.

Someday, I’ll write about my mental illness and how it changed my life.

Someday, I’ll have enough money to invest in the books and courses that I need.

Someday, I’ll email my idol and thank her for her work.

Are you a “someday” person?

Whatever you want to do, get started on it today.

TURKEY: “In Turkey, the biggest information source is TV. The radio and television council that regulates TV broadcasting are constantly fining independent media. There are no balances to check how these authorities work. They are cherry-picking to punish independent outlets for any type of critical coverage. So, [journalists] constantly self-censor,” said Renan Akyavas, Turkey program coordinator for the International Press Institute.

INDIA: “Indian authorities have blocked a Pulitzer prize-winning Kashmiri photojournalist from taking a flight to Paris where she was to take part in a book launch and photography exhibition displaying her photos from Kashmir. Sanna Irshad Mattoo, who works with Reuters as a multimedia journalist from Indian-administered Kashmir, was stopped at the Delhi airport by immigration officials on Saturday, despite holding a valid French visa.”

TAIWAN: Standards for Taiwanese book imports by Chinese resellers have become stricter, an independent bookstore owner in Beijing said yesterday. Certain publishers that print works touching upon subjects that are sensitive in China, such as democracy, protests and human rights, are now blacklisted entirely, the person said, citing the experiences of Gusa Publishing. 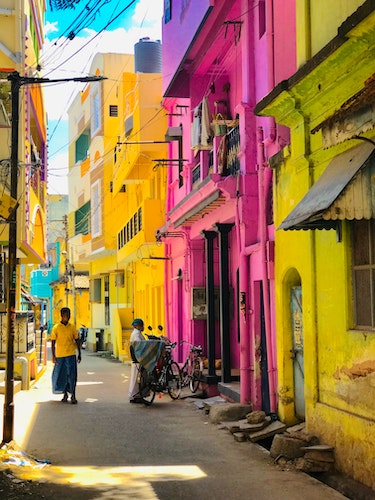 Photo by Mohamed Jasim on Unsplash

“After nourishment, shelter and companionship, stories are the thing we need most in the world.”

A day spent not writing feels like a day wasted. Share The Wordling with a writer who lives by that sentiment.