I realized the other day that it wasn’t until much later in my writing career that I started doubting myself. But I was already making a living at it by then.

Surely there’s a lesson in that.

In the June 7 issue of The Wordling, we talked about how there’s a new push to rethink the traditional page-to-screen pipeline and how agents are getting a seat at the Hollywood table.

Two more developments on that front this week.

One, London-based Curtis Brown, one of the world’s leading literary and talent agencies, has been bought by California-based United Talent Agency (UTA). A statement by the two companies reads, “This alliance… is driven by a shared desire to ensure greater opportunities for clients across an increasingly global entertainment and culture landscape, in which traditional buyers and distributors such as studios and streaming services are expanding far beyond their home markets.”

Take note: studios and streaming services. We’ll return to that in a minute.

The second big development is The Washington Post entering into a partnership with Imagine Entertainment “to create scripted and non-scripted film and television properties derived from The Post’s vast archives, current reporting, and ongoing investigations.” Creative Artists Agency (CAA), which represents both entities, brokered the deal.

“At The Post, we’re storytellers at heart. Whether it’s holding the powerful to account, or shredding light on an exceptionally compelling narrative, we see tremendous untapped potential for extending the reach of our journalism,” Washington Post Publisher and CEO Fred Ryan said.

What does this mean for writers? A few thoughts:

1. Understand the value of your intellectual property. As a freelancer and independent author, your intellectual property is what makes you money. It’s also what a publication buys. Be careful about the rights you’re signing away, especially to long-form reported stories and essays. Make sure that if a movie or a documentary is made from your work, you’re not left wondering why you didn’t get paid.

2. Agents are making a comeback: In the last ten years, literary agents have become increasingly irrelevant. Smart authors have rightly questioned why they need traditional publishing when they can just as easily reach audiences themselves. Agents know this. Publishers know this. And resourceful agents have started bringing opportunities to authors that they wouldn’t get elsewhere. Such as access to screenwriting opportunities, worldwide audiences, and movie and streaming deals.

3. Visual storytelling will sell: Books and writing styles go in and out of vogue. With this push on selling to Hollywood, our prediction is that stories that translate well to screen are going to sell much more easily to publishers and for a lot more money.

A contract clause to beware of: Here’s an egregious rights grab clause in a book publishing contract that you need to be aware of. (Editor’s Note: Even when you have an agent, make sure to read—and understand—your contracts.)

On the joy of being (completely) alone: “Uncontrollable. They meant the word as criticism; I wore it as a badge. My fiancé saw it as a challenge,” writes Seema Reza.

Work is ongoing on our Agents database. Over time, we intend to give each agent their own page with up-to-date details of what they’re looking for, links to their recent sales, what’s been written about them in the media, and feedback from authors on what it’s like to work with them.

In the meantime, our list for UK-based agents is complete.

Take a look at it here.

If you want to be seen and heard, stop trying to fit into a specific box and start talking authentically about what you believe, what you stand for, and the truth of what you see.

Businesses that sell widgets may well have niches. Creators don’t.

Which one are you?

SCOTLAND: “The launch of a guide to make literature events more accessible and a YA panel featuring Juno Dawson are among the events at Edinburgh International Book Festival’s Business of Books strand this year. Running for its second year, The Business of Books aims to offer an international forum for sharing ideas and expertise about how the book industry operates and is aimed at writers, publishing professionals, programmers and anyone wishing to learn more about the trade.”

TAIWAN: Last month, the Taiwanese Ministry of Foreign Affairs announced a contribution of half-a-million US dollars (450,000 euros) in support of Reporters Without Borders’ (RSF) actions for journalism in Ukraine. “Thousands of reporters are currently risking their lives to show the world the reality of the Russian invasion in Ukraine” says RSF Secretary General Christophe Deloire. “This donation not only allows us to strengthen our on-the-ground actions by providing these journalists with more protection gear and security training, but it will also help combat the Kremlin’s disinformation campaign to justify its invasion of Ukraine”.

RUSSIA: For GQ, Vadim Smyslov writes about the rockstars, writers, actors, and filmmakers leaving the country: I understood that if I ever wanted to be able to speak and write openly about the war, leaving the country was necessary. Clearly, this had been Putin’s plan—to let those who “rock the boat,” as he liked to put it, to leave. “The Putin regime allows you to leave the country,” Kolmanovsky, the scientist, told me when we met in Georgia. “People leave, criminal cases are brought against them back in Russia, and then they can never return.” 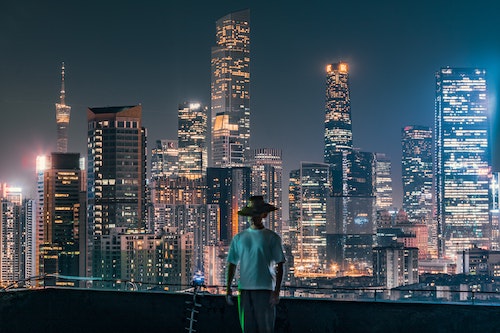 Photo by 张 岱 on Unsplash

“My own experience is that once a story has been written, one has to cross out the beginning and the end. It is there that we authors do most of our lying.”

The Wordlings have given themselves a stern talking to and vowed not to work on more than two projects at once. Share The Wordling if you’re multi-passionate, easily distracted, and commitment phobic, too.