I’ve never had this happen with a novel, especially so early in the process. I’ve outlined this novel twice, each time getting closer to my vision of what I want it to be. But as I started writing, literally everything I had planned went out the window. Two new characters showed up on page 2 and started doing all manner of things for reasons I didn’t know.

Now, see, I’m a control freak. I like knowing where my story is going. I outline extensively because it makes me nervous to not know the basic facts about my characters and their motivations.

But I decided to trust and just go with it. And, over the weekend, they began revealing themselves to me.

I’m still nervous. The last time I wrote a novel like this, it took seven years. But, and I admit this begrudgingly, it does feel like a better way to arrive at a deeper story. As long as it doesn’t take another seven years, that is.

The rise of poetry

What once started off as a social media trend, with poets such as Rupi Kaur and Morgan Harper Nichols amassing hundreds of thousands of followers by posting poetry online, is now an industry on the rise. Especially globally.

Indian poets found an increasing number of people turning to poetry during the pandemic. Shloka Shankar, a Bengaluru-based found poetry and poetry instructor, told The Hindu that although this style of verse is considered novel in India, the genre has enjoyed a gradual growth in interest.

In New Zealand, it is “the year of poetry,” according to The Spinoff, with New Zealanders buying large amounts of local poetry.

“Visits to the free poetry website poets.org, maintained by the Academy of American Poets, went up 30% in 2020 as the pandemic began, and traffic remains high,” reports the CS Monitor. “Then came Amanda Gorman’s showstopping performance at the 2021 inauguration of President Joe Biden. Eventbrite reported that the number of poetry events registered on the online invitation site leaped 24% in the weeks following the inauguration performance. That figure has increased an additional 26% in the past year, an Eventbrite spokeswoman told the Monitor.”

Earlier this year, after a TikToker posted a video about a rare book that she dreamt about, sales of an obscure collection of Canadian poetry went soaring. The Fifth Window, first published in 2000, had until then been difficult to get hold of and was only available when requested from university libraries. After the video went viral, the publisher reprinted the books and orders started flooding in not only from across Canada but 33 US states as well as countries including Ireland, Norway, Australia, Germany, and Bulgaria.

Poetry is also seeing a new resurgence thanks to Web 3.0. While still in its infancy, many poets and artists are already finding ways to use the blockchain and AI to not only sell their poetry, but to create it.

How do algorithms help (and hinder) book sales? “In promoting my published novels, I discovered that the digital environment doesn’t offer a level playing field. Although anybody can promote books online, algorithms ultimately favor those with resources—the authors whose publishers provide a decent marketing budget and those (traditional or self-published) who have support for the marketing legwork or can afford to pay for marketing services.”

Long-term IP management: “Most writers think their work isn’t worth anything. They license as much of the copyright as they can on the first sale, figuring that’s all the money they’ll get. Agents encourage this, because they want upfront money. Major magazines have now changed their contracts to demand that writers license the full copyright, including movie and TV rights. Agents and magazines (and many others) have recognized the value of a writer’s copyright, but writers don’t. Writers don’t understand IP at all. They certainly don’t understand that they can license their IP in hundreds of different ways.”

Mic is looking for both features and timely stories to be turned around quickly. Rates start at $400 for essays.

MIT Tech Review is looking for front of book pieces.

Insider is looking for stories about people who’ve moved to one of these cities: Miami, Tampa, Phoenix, Sacramento or Las Vegas and love/hate it.

Immerse yourself into the world of NFTs, the metaverse and more.

Conceptualized developments of the next internet era, the Web3 creator is a newsletter offering candid insight amongst the noise and hype.

From NFTs, the metaverse to blockchain and more, over 100,000 monthly creatives are reading into what’s working and what’s not.

The same person cannot say “I am meant to be a writer” and “I don’t have time to write” without one of those two sentences being a lie.

RUSSIA: “Novaya Gazeta, one of Russia’s last remaining independent news outlets, is under threat after the country’s media watchdog demanded that its website and print edition be stripped of its licence. “Russia’s censorship agency Roskomnadzor has demanded that Novaya Gazeta’s certificate of registration be declared invalid,” the publication said in a statement.”

GREECE: “The Greek broadcaster Antenna is exploring an acquisition of Vice Media, according to three people familiar with the matter who spoke on the condition of anonymity to discuss private negotiations. The deal would consummate a longstanding business relationship between the two companies.”

INDIA: “SAGE Publishing, a global publishing house specialising in academic books, journals, reference and library products and services is shutting its book publishing division in India. The layoff process has begun, with nearly 70 employees already told of their termination. “SAGE has always been a great company to work for. But the firing process has been brutal and humiliating. People have been given no chance to speak, made to sign NDAs and told to hand in their resignation letters with immediate effect,” said a company insider, on conditions of anonymity.” 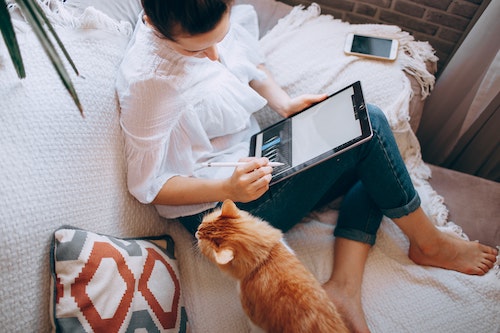 Photo by Helena Lopes on Unsplash

“Stories have to be told or they die, and when they die, we can’t remember who we are or why we’re here.” – Sue Monk Kidd, The Secret Life of Bees

The Wordlings are homesick, but can’t foresee a way in the near future to get home. Share The Wordling if you’d like to send us some love and make us feel better.