We ended up not being able to make it to Wales (train strikes), so we had an amazing staycation in Brighton instead. We went for walks, for dinner, to the beach. I drank masala chai all day every day, read four novels, painted a wall in the living room, Marie Kondo-ed my wardrobe, reorganized my bookshelves, and had a swimming lesson for the first time in my forty years of life. Oh, and hit 25,000 words on the new novel.

Back to it now and we have a lot of literary catching up to do. So let’s get straight to it.

An insider view of US publishing

While I was away on holiday, the publishing anti-trust trial wound down. So I thought I’d pick out a few interesting tidbits that are interesting to us as writers:

Over the course of the trial that ensued, publishers would continue to insist on their existing public image as helpless incompetents at the whims of larger companies and an irrational market. The government, meanwhile, stuck to the narrative that the publishers were savvy operators who knew exactly what they were doing with their billion-dollar companies. The question of which story was most convincing will help decide the future of American antitrust law.

From The New Yorker:

Despite their aura of idealistic adventure, publishing executives have shown themselves to be fiercely risk-averse. In a capricious market, they’ve leaned on hundred-year-old inventory instead of nourishing the books that might become tomorrow’s backlist. They’ve touted proven formulae—marquee names and their imitators—at the expense of experimental talents. The industry’s dominant shops appear to have calculated that safety lies in what readers know—a category that may or may not overlap with what readers want.

From The New York Times:

What I have seen as a bookseller is that publishing, originally geared toward offering new writers the chance to connect with readers, evermore trends toward an industry narrowly engineered to produce repeat best sellers. The immense resources of a Penguin Random House or a Simon & Schuster will train mostly on a small percentage of its authors; the rest of the authors whom they publish will hope to take advantage of what collateral prestige and opportunity exists by being published in the company of household names.

Also from the New York Times:

During their testimony, Penguin Random House executives said that just 35 percent of books the company publishes are profitable. Among the titles that make money, a very small sliver — just 4 percent — account for 60 percent of those profits.

All the discussion of advances seemed to point to PRH’s willingness to spend whatever is necessary to acquire the books they believe in—although once a book with a big advance is in-house, McIntosh said, it gets no special treatment. McIntosh and several other witnesses, including publishers and agents, repeatedly stated that advances are not tied to marketing plans. McIntosh also acknowledged that sometimes other factors got involved in acquiring a book, regardless of what a P&L statement says. “Book H,” for example, had a $4 million-advance, and did not earn out. “Why would you give such a book such a high advance, since the computer P&L program allows you to see the profitability available at lower levels?” the defense asked. “Because this was a second-time PRH author, and their agent was very persuasive,” McIntosh said. “Who was the agent?” the defense asked. McIntosh: “Andrew Wylie.”

From The Los Angeles Times:

As Ayesha Pande, a literary agent, testified at the trial: “Overall, I think it will limit the choice and number of editors and imprints and publishing houses that would be a good home for my clients.” She added the situation would be particularly challenging for her clients as her agency works mostly with writers of color and other underrepresented voices.

And finally, if you like numbers, here’s a thread that parsed all of them for some interesting info.

An industry of rejection: “What I try to remember, when I think back to being an editor, or that intern, is that the nature of this industry is such that there will always be someone who won’t like what you’re doing, that will say no, for a multitude of reasons. The thrill is in finding the one who says yes.”

Talking to myself: How dictation software helped me navigate pandemic pain: “I walked for hours each day and into the night. Initially I listened to audiobooks and podcasts. But soon I began speaking quietly into my smartphone, dictating emails, then essays. There’s a long history of walking writers, from the Peripatetic philosophers to Wordsworth, Nietzsche and Thoreau.”

That you expect to win every assignment, every sale, every contract, is what is keeping you from submitting in the first place. When you accept that you will lose most of the time but that the wins will be big enough and sufficient enough to sustain you, THAT is when you will have understood what makes an artist’s career and life.

Prepare yourself for both.

BRAZIL: “In recent months, Brazilian digital new outlets AzMina and Núcleo have created a tool to follow the debates of their readers on Twitter and promote conversations between the public and the media outlets on the social network. The idea is that, by getting to know their audience better and knowing what their interests are, the media can get closer to their readers and increase the impact of the journalism they produce.”

AUSTRALIA: “Australia is the poster child for government intervention to trigger support from the tech platforms to help transition media to the digital future. Under the news media bargaining code legislated early last year, platforms designated by the relevant minister are required to negotiate agreements with news media over use of their stories on their services.”

HONG KONG: “Founded in 1903 and headquartered in Hong Kong, the South China Morning Post is one of Asia’s most respected news organizations. It is also one of the most progressive with a strong emphasis on audience engagement across multi-channels– SCMP’s UGC YouTube channel reached a staggering 1 billion views in 2020 alone, whilst this year the publisher has ventured into the Metaverse as part of The Sandbox’s Alpha Season 2.” 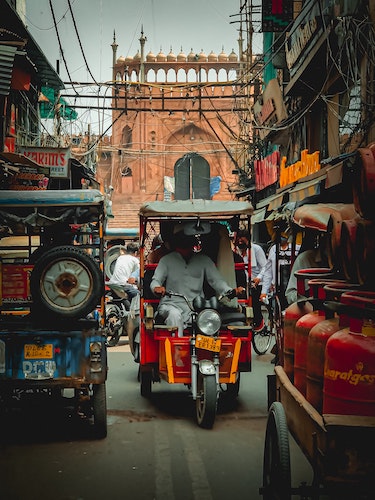 Photo by Anurag Chandra on Unsplash

“If you have other things in your life—family, friends, good productive day work—these can interact with your writing and the sum will be all the richer.”

Sometimes the Wordlings feel like their lives are stuck in an endless loop. The same priorities, the same problems, the same roadblocks. Share The Wordling if you’re ready to let go of old challenges and set yourself some new ones.