For the last few months I’ve been writing ten articles a month, in total, for three content marketing clients. None of them are bylined. It’s consistent work, it pays the bills, and it affords me the freedom to build this business and figure out next steps for my books. But let’s be honest, if it weren’t for the money, I wouldn’t be doing it.

I started writing a new novel last week. I wrote 5,000 words in two days, and then I had deadlines, so I had to step away. I’m usually pretty good at balancing the art and the money work, but I was on a roll with the novel and being forced to stop frustrated me no end.

Still, it’s been a while since I was excited about a new project and just writing with no expectations of myself or the work has been incredibly freeing and creatively satisfying.

I’m reminding myself that, at least for me, the joy is always in the moments when I’m writing. In the hours I spend doing the work. The publishing, the agents, the desire for recognition is all ambition. The writing, though? That’s pure joy.

Colleen Hoover, the New York Times bestselling author, is everywhere. Fifteen of Hoover’s 22 novels and novellas made the USA Today bestseller list this week, and five of the top 15 books on the New York Times Combined Print & E-book fiction list are written by her.

It’s become shorthand to attribute Hoover’s success to a random viral TikTok phenomenon. But Hoover already had a successful career built on smart business decisions, which made the random success—when it came—even sweeter. I thought I’d talk about some of those decisions today.

When Hoover wrote her first novel in 2011, she knew nothing of the publishing industry. She just wanted the book to be available on the Kindle so her grandmother could read it. So, on Jan 1, 2012, she indie published “Slammed” on Amazon and, shortly after, its sequel “Point of Retreat.” Through some influential book bloggers and social media, word of mouth kicked in and, by August, both books had hit the New York Times ebook bestseller list (this no longer exists).

Unsurprisingly, publishers were interested. At this point, Slammed had sold over 179,000 copies in the US and Point of Retreat 122,000. Atria won the rights to the books after a “heated bidding war.”

Nurturing her fan base:

Colleen Hoover’s fans don’t just love her work, they’re obsessed with it. Her readers—who call themselves the CoHorts—drove a campaign in 2013 to have one of her standalone novellas traditionally published. Hoover had released this as a free ebook for her fans, but they took to Facebook and Twitter in the thousands and called for the book to be released in print. 5,000 tweets and hundreds of posts and memes later, Atria Books said yes.

Hoover is a natural at social media. In 2016, she started a Facebook group for her fans called Colleen Hoover’s CoHorts, which currently has 129,000 members. She has a funny, self-deprecating, and effortless style on social media, which endears her even more to followers and fans.

All the books Hoover published with Atria made the New York Times bestseller list.

In a TikTok video, Hoover shared that “Verity” was turned down by her publisher when it was still in idea form. She wrote it anyway, published it independently, and it is now her highest selling book ever.

The book was already a New York Times bestseller and spent two weeks on the list in 2016 after its release. The novel sold 21,000 copies in its first month and Hoover had good publicity—“a nine-stop national book tour, blurbs from bestselling authors,” etc. Sales flatlined after the first month. “For several years, weekly sales rarely broke triple digits.” Then TikTok happened.

Hoover stresses she did nothing to cause this spike. “Any success of mine that came from TikTok did not come from me, it came from the readers who have made videos about my books and shared them on the app. I rarely post there, and when I do, it’s not always about my books. I’ve had the app for several years and haven’t done anything new or different in the past year or two that would change the trajectory of my success. That credit all goes to the lovely people of BookTok.”

Many of whom already knew and loved her because she’d been talking to and interacting with them for years.

How writers can conceptualize their work: “If you’re telling a conventional story, the development of a premise, possibly expressed in a single sentence, is the most critical phase of your project. In some form, it will go in the enquiry letter to an agent or publisher, on the cover of your book and on posters for the movie adaptation. Plenty of writers will tell you that it’s not their best-written books but the ones with the compelling premises that have been most successful.”

Writing a book. Still have ADHD: “But even with the extra time, and even with the awareness I’ve gained in my journey to understand and even love how my ADHD brain works, there are still large portions of time where progress seems impossible, and I always feel the doom of the LAST MINUTE SCRAMBLE TO MEET A DEADLINE that I can feel waiting for me from day one.”

The Fix has put together a list of the top grants for media startups and freelancers, including:

Pulitzer Center Grants:  Global Reporting Grants support journalistic work on the underrepresented groups in the media. This is Pulitzer Center’s across-the-board grant, so the topics can vary. There are also several theme-specific grants.

Details of eligibility and how to apply here.

… to TheFutureParty. It’s a free daily newsletter that curates stories spanning pop culture, entrepreneurship, entertainment, and tech, and breaks down what it all means for the future. Translation? It’s the only newsletter in the game that’ll both highlight the hottest trends in the alternative asset market (spoiler: it’s probably Pokemon cards) and share what’s trending on Spotify.

I’m behind. You’re behind. We’re all behind, always behind.

You can’t change that. You can try, but there will always be more things adding up, more things to be done, more things piling on top of one another.

Don’t try to catch up. Catching up is not the point.

The point is doing. The point is finishing. And this is how you do that: You pick something, anything. You deal with it, finish it, bring it to completion, take it off the list. Now, pick something else. Repeat.

You can never be completely caught up, so stop trying. Instead, try to find completion.

Pick something, finish it, on to the next. Repeat.

What are you behind on? And what’s the thing you’re going to pick and tackle RIGHT NOW?

UKRAINE: “I reported for Channel 4 News from Ukraine during the first weeks of the invasion. These are expanded versions of letters that I wrote home.”

GUATEMALA: “In another sign of growing political repression in Guatemala, the authorities have arrested an award-winning journalist who was critical of the government and raided the offices of the newspaper he founded.”

INDIA: “India’s large and growing internet base has magnified the government’s concerns about disinformation, hate speech, and other dangers online. However, critics say the recent moves are simply cover for cracking down on free speech and dissent.” 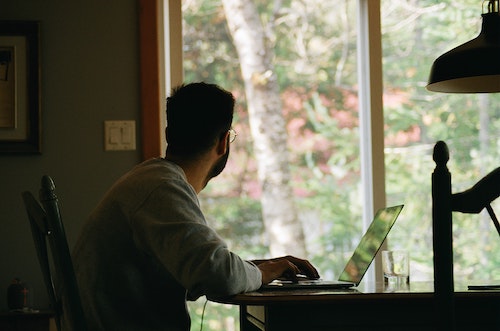 Photo by Yasmina H on Unsplash

Find the thing you’re most passionate about, then do it on nights and weekends for the rest of your life.