I am exceptionally lucky when it comes to freelance clients. My editor at Elle would pay me months in advance so I would quit talking about how broke I was and concentrate my energy on reporting stories. An editor at GlobalPost assigned me multiple stories and paid for them pre-editing when I returned from maternity leave. And you’ve heard me talk about how my agent paid for me to work with a top editor in New York for my second book because she believed in it so much.

Just this week, I had a new client offer to pay me in advance for work to be assigned later in the month. We signed a contract a few weeks ago, and they’d been slow in sending assignments. My client was feeling guilty for having kept me waiting and wanted to make sure I wasn’t left financially vulnerable as we got started.

I don’t often lose faith in people but every time I come close, someone beautiful comes along to show me that the minority are not the rule.

Just thought I’d share that reminder with you today.

Two big book awards in the UK have been shut down over the last couple of months.

In June, the Costa Book awards, which have been running for half a century and were known as the Whitbread book awards until 2005, were abruptly scrapped. The Costa Book Awards have helped elevate the careers of many authors and brought books such as The Mermaid of Black Conch, H is for Hawk, and Small Island to the attention of readers.

In July, the Blue Peter book awards, given to fiction and non-fiction books for children, were axed with the funds for the awards now being directed to disadvantaged families. The awards had been running for 22 years and “offered visibility and discoverability on a major—perhaps unmatched—scale.”

Literary awards have a long and problematic history. In April this year, novelist Philip Hensher, both a former Booker prize judge and nominee, told the Telegraph: There have been three occasions over the past 10 years where I’ve found myself on a panel, trying to talk about a really good book, and one of my fellow judges says, ‘Oh, I just didn’t read it. I just looked at the photograph of the author, and I’m not going to read a book written by someone like that.’

After the Booker Prize split the award in 2019 between two winners, Margaret Atwood and Bernardine Evaristo, one of the judges wrote: “How do you judge the titanic career, the contribution to culture of Margaret Atwood […] against the quality and consistency of Bernardine Evaristo, who was in my view hitherto hugely underrated?” Sam Jordison, the publisher of one of the shortlisted books, said at the time, “It’s one thing to feel bad about losing. It’s another to feel you were never in the game.” It had never been about choosing the best book, he realized.

For authors who do win the prizes, though, victory can come with large cash prizes, higher readership, bigger opportunities, and a considerable spike in sales. The truth is: prizes still matter, though perhaps not for long. While traditional avenues for book criticism have all but dried up—giving prizes even more weight—new forms of discoverability, such as TikTok and BookBub are disrupting traditional models of reaching readers.

And that’s where the next generation of book lovers will be looking to find their next great read.

How to use Twitter’s #journorequest to find sources for your stories: “When you’re in the beginning stages of reporting, #JournoRequest allows potential sources to find you, decide whether they’d like to speak on the topic you’re covering, and reach out themselves,” writes Zoë Hannah. “It’s possible to use Twitter to browse for sources through social listening — or seeing how people are interacting online.”

Let’s get down to business, shall we? We’ve added 7 new business publications to our How to Pitch page this morning.

The Tilt: Timely and relevant content to help content entrepreneurs build and grow their businesses, from audience development to revenue generation.

Atlanta Tribune: Our Editorial mission is to educate and advocate by delivering a fusion of the latest news and trends surrounding wealth-building, business, careers and technology.

BCBusiness: Eight times a year BCBusiness delivers features that shed light on the significant issues and trends shaping the province. As B.C.’s premier business publication, we naturally gravitate to stories that affect the working lives of our readers. But we also know those readers are more than their job titles; that means giving them stories that appeal to their interests beyond the bottom line.

Stocks & Commodities: Computer trading utilities, charting methods, and how-to tutorials are in highest demand, but anything of interest to most investors is also appropriate for submission.

Working Money: Readers of Working Money are looking for articles that give them solid, how-to information about investing their hard-earned money. Financial planning strategies, how to choose mutual funds and other investment instruments, and how-to tutorials are in highest demand, but anything of interest to most investors is also appropriate for submission.

Traders.com Advantage: Charting methods and interpretation in a how-to tutorial environment are in highest demand, but anything of interest to most traders and technical analysts is also appropriate for submission.

Meetings + Events: Our mission is to reach the professional meeting planner as well as all levels of professionals who plan meetings and events, from administrative executives planning a board retreat to the vice president of marketing organizing a client golf outing.

We have now have links to 131 pitching guidelines. Check out all the publications, organized by category, here.

You have an hour to write. You could spend it on writing your novel, struggling with it, writing words, deleting them, practicing, getting frustrated no doubt, but in the end, adding to your learning.

Careers are built a decision at a time, an hour at a time. They’re ruined in the same way.

TURKEY: “German broadcaster Deutsche Welle and U.S.-based Voice of America said they will not apply for licences in Turkey as requested by the country’s media watchdog, a decision that could lead to their websites being blocked there. The vast majority of Turkey’s mainstream media outlets are seen as close to the government, with coverage favouring President Tayyip Erdogan and his allies. Turks have increasingly resorted to alternative outlets, some foreign-owned, and social media for news.”

INDIA: “Twitter said on Tuesday that it had sued the Indian government, escalating the social media company’s fight in the country as Prime Minister Narendra Modi seeks more control over critical online posts. The suit is the first legal challenge that the company has issued to push back against laws passed in 2021 that extended the Indian government’s censorship powers. The rules gave the government oversight of Twitter and other social media companies, allowing the authorities to demand that posts or accounts critical of them be hidden from Indian users.”

ITALY: “Giannino Stoppani Children’s Bookstore in Bologna, Italy, is fundraising to help recover books after a recent fire. On May 20, the children’s bookstore, which was founded in 1983 and is well known to attendees of the Bologna Children’s Book Fair, suffered a fire that caused an evacuation. Flames developed on the first floor of the library, and caused flooding of the store’s mezzanine floor, which is used for storage and as an office. The two employees and sole customer who were present when the fire broke out were unharmed.” 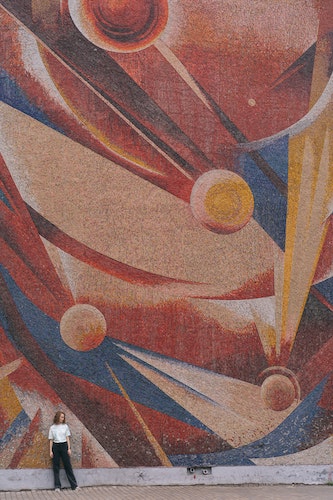 Photo by Андрей Курган on Unsplash

The first draft is to make it exist.

The second draft is to help it make sense.

And here’s what you do with the third.

The Wordlings are proud of themselves for having meditated for eighteen days in a row. Share The Wordling with a writer who likes a good streak, be it writing or meditating.